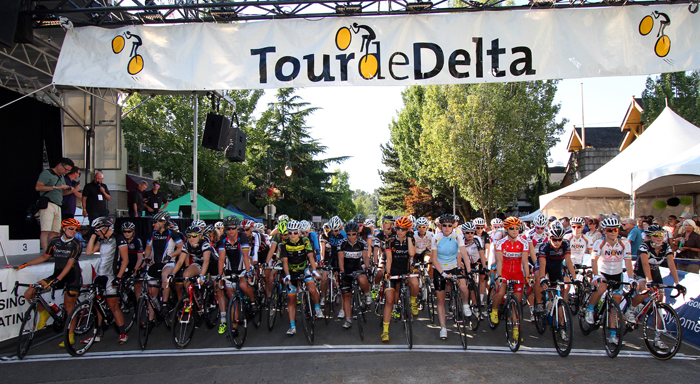 In just two weeks, more than 200 professional cyclists from every corner of North America and around the world will converge on the Lower Mainland for BC Superweek, which begins with the $25,000 Tour de Delta.

“The collaboration between the Corporation of Delta, local businesses and community members with the Tour de Delta continues to grow year after year. It is wonderful to see how incredibly welcoming the community of Delta is to all the teams and riders,” expressed BC Superweek Series Director Mark Ernsting.

Bordered by water on three sides, the Corporation of Delta provides a spectacular backdrop for the MK Delta Lands Criterium on Friday, July 8th in North Delta, the Brenco Criterium on Saturday, July 9th in Ladner, and the UCI-sanctioned White Spot | Delta Road Race on Sunday, July 10th in Tsawwassen.

“For over 15 years, Tour de Delta has been attracting cyclists and spectators from Canada and around the world. This annual event has become a key summer attraction and acts as an excellent ambassador for sport in our community,” said Mayor Lois E. Jackson. “Thanks to the great athletes, our staff and all the amazing volunteers, this year’s Tour de Delta will be the best yet!”

For fans and aspiring cyclists watching the UCI sanctioned competition at the White Spot | Delta Road Race, the experience of seeing Canadian athletes up close and personal accumulating points with an eye on international competition should definitely leave an impression.

In addition, organizers of the Tour de Delta added another level of excitement to the Brenco Criterium this year with a new course and an elimination component. In an elimination race, following a set amount of opening laps, the last rider crossing the finish line every second lap will be pulled from the race until a set number of laps remain. At that time, the race continues as a regular criterium to the finish.

“We chose to do an elimination race format this year for the Brenco Criterium in Ladner because with the new course design, the length of one lap is less than 800 metres. Such a short course should mean faster speeds and a unique show for all spectators to enjoy,” explained Ernsting.