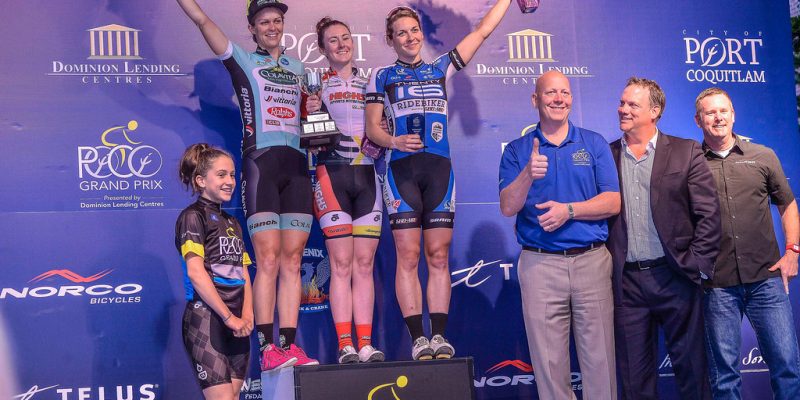 The BC Superweek Aussie domination continued on the women’s side as well at the inaugural PoCo Grand Prix p/b Dominion Lending Centres as riders from Down Under took two of the top three spots on the podium for the second time in three races.

In the end, it was independent rider Kendelle Hodges from Melbourne building on her third place finish at Wednesday’s Global Relay Gastown Grand Prix to take the win in Port Coquitlam, sprinting ahead of countrywoman Kimberley Wells (Colavia | Bianchi) and Team Canada rider Alison Jackson.

“I knew whoever was first around that corner was going to win today, I went for a couple of early primes, I didn’t want to go for any later ones and it worked every time,’ said Hodges. “The sprint was really to that corner, so we went early and Kimberley went to come around me and I knew I had to beat her around there so I did and it worked out well.”

Wells won the Giro di Burnaby on Thursday night and now has three straight BC Superweek podium appearances after also being second at the Global Relay Gastown Grand Prix. The 30 year old recognized the tactics of both Hodges and Jackson on the final lap.

“I didn’t get the timing right today, I knew that Kendelle was working with Alison, so I was very aware of that. They were playing 1-2 along the back straight so I was forced to the front and had to control Alison and then Kendelle jumped the inside,” the two time Australian National Criterium Champion explained. “It’s only a hundred metres from the final corner to the finish so pretty much however you see the people coming through the final corner is how they’re going to end up by the finish line, so I knew 150 metres out that I hadn’t quite done that one right.”

Hodges rides for the High5 Dream Team in Australia, but is on her own without a team at BC Superweek yet acquitting herself quite well. She used her previous experience riding with Wells in her favour on the final lap.

“Kimberley is one of the top Aussie sprinters, we’ve been on a team before back home so I knew her riding style and I knew when she was going to go so that kind of helped. It wasn’t just purely the sprint, it was getting to that corner first today,” said the 24 year old Hodges.

For Jackson, who’s an alternate for the Canadian Olympic Cycling team competing next month in Rio, it’s the third time she’s been third at a BC Superweek race this year, also achieving the placing at the White Spot | Delta Road Race on Sunday and at the Giro di Burnaby on Thursday. When it came to the final lap of the PoCo Grand Prix on Friday, the former triathlete just ran out of gas.

“The last lap is always a lot more fighting, it’s faster, and I knew I had to be first out of the final corner. My opportunity came a couple of corners earlier, I went for it and I’m still happy with the third,” said the 27 year old former Abbotsford resident who now makes her home in Vermillion, Alberta.

And when it comes to being an Olympic alternate, it’s something Jackson couldn’t have fathomed when she started her career.

“I didn’t get my first bike until I was 19, and actually BC Superweek was the first set of races – two years ago – that I came to, tried to race against the pros and see how I did, and ended up winning some races, got a pro contract, and now just two Superweeks after, I’m on the Olympic team,” she said with a proud smile.