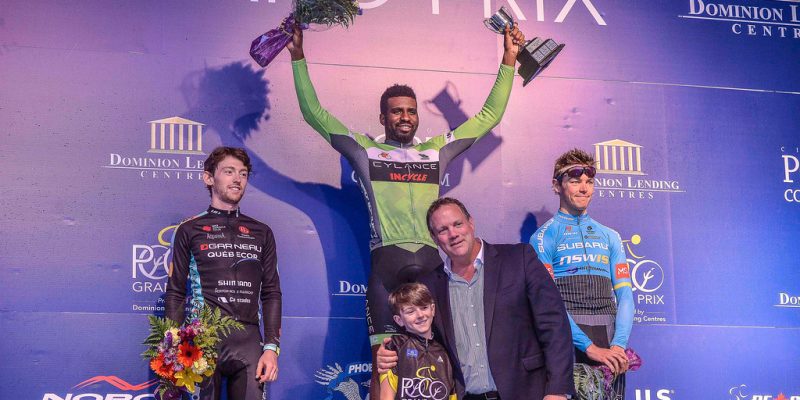 In front of a raucous crowd excited about professional cycling coming to its city, American Justin Williams, riding for Cylance/Incycle p/b Cannondale, streaked across the finish line to make history as the first winner of the $15,000 PoCo Grand Prix p/b Dominion Lending Centres.

Williams, who is an eight time U.S. National Champion including the 2008 U23 Criterium title, sprinted just ahead of Aussies Michael Rice from Garneau-Quebecor and Subaru NSWIS & MS rider Scott Law to claim the $2,200 first prize. With the 1.3 kilometre course being new to all riders, it didn’t take long before the pros figured it out, pinpointing the corner of Elgin Avenue and Shaughnessy Street as one to watch.

“We knew it was a race to the corner and Scott, who has been phenomenal over the last month, went in front of me and said, ‘You know what, let’s go!’,” said Williams. “We trusted each other into the corners, I went around Scott a little before that final corner and I knew I had to win that one. I’m a little bit faster in corners, so I decided to take the front and it worked out.”

With the second place finish, Rice now has three podium appearances at BC Superweek this year after also being third at the Global Relay Gastown Grand Prix on Wednesday as well as last Saturday’s Brenco Criterium.

“I’m slowly climbing up the steps and there’s one more to go. The last few laps were pretty crazy, we all knew it was going to be a race to that last corner as we saw with the women, and the Garneau-Quebecor guys looked after me all race. The last lap was up to me and Justin was just a bit too strong a racer after that left hander (corner),” said the 20 year old native of Ainslie, Australia, who was the 2013 U19 Australian Road Race Champion.

With his Cylance team riding well so far during BC Superweek, including his own second place finish at last Saturday’s Brenco Criterium, Williams noted that they had to adjust the way they were riding heading into the Port Coquitlam race.

“We started off just grabbing the races by the neck and just riding from the beginning on some of the tighter courses, but then we think it started to get a bit predictable so we decided to change it up and put guys in moves, bring really important moves back and then hope it comes down to a field sprint and then take the front a little bit later. It worked to perfection today,” he said.

For a while during the race, it looked like Law’s teammate Ayden Toovey would take the win after going away off the front, but despite falling back into the peloton and ultimately finishing 87th, the 20 year old played a big role in his Subaru NSWIS & MS team making it onto the podium.

“It worked really well for us, Ayden did an awesome job, he’s a strong little boy and he definitely gives us a good run for our money out on the road, but it was awesome to see and all the boys rode awesome, I can’t thank them enough,” said Law. “We only had four of us in the race, and when you’re going up against the likes of Silber and Rally, and six man teams, it’s pretty hard to compete. We just had a game plan to go out there and be aggressive, have a bit of fun with it.”

Fun was the name of the game for all involved in the first ever edition of the PoCo Grand Prix, with the community attending in droves and cheering on all the riders in an event that appears to have won a place in the hearts of all in Port Coquitlam.